This isn’t a dessert or anything like the dessert of the same name. The meal I propose to you is so cheap, so easy, so ludicrously indulgent in a way only comfort food can be, you and your kids will be thanking me! It’s not the healthiest of meals. It’s mostly just mashed potatoes with cheese piled on top of some hotdogs. Yeah, you think I gave the recipe away there, and while you could probably work it out on your own, I am going to share a few tips to making this taste like something more than weird college food.

First off, you’re gonna need to mash some potatoes. I should mention here, that Tillie Toro isn’t allowed to cook in most kitchens. Mostly because while I was younger, I managed to catch my parents stove top on fire while boiling water for said mashed potatoes. But don’t worry, I only caught my kitchen on fire two more times before I figured it all out.

Okay, here we go… Since the potatoes take the longest, start cooking those first. 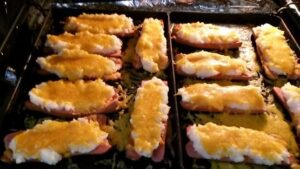 So, yeah. That’s a Tillie original right there. Now I’ve seen some people get all fancy by adding sour cream right after the mashing part of the process or even green onions and bacon bits, but like I said, you do you. You’re the one who has to eat it.